Kathy is running for re-election to her 8th consecutive term. It's Gina's first time seeking elected office. She will run for the seat currently held by Francine Glaser who is not running for re-election. "I will be very happy to have Kathy back for another term,” said Mayor Colleen Mahr, chair of the Democratic Committee. “She has demonstrated her commitment to Fanwood and its citizens over two decades. Gina will be a fantastic addition to our governing body. She is a very involved parent and engaged in issues that cut across our diverse community.”

We mourn the passing of Joe Higgins

Mayor Colleen Mahr and the Fanwood Borough Council express their condolences on the passing of Joseph Higgins, a former member of the Fanwood Council who coached baseball alongside his son at Scotch Plains-Fanwood High School. Mr. Higgins died on July 1st at age 75 at his home in Woodbridge, NJ.

While on the Council from 2005-2007, Joe served as Chair of the Recreation and Community Services Committee; as Council Liaison to the Land Use and Historic Preservation and Shade Tree Commissions; as Council Liaison to the Planning Board; and as Fire Commissioner. In addition to serving on the Fanwood Council, he was a volunteer assistant baseball coach at Scotch Plains-Fanwood High School from 2010-2019 alongside his son Joseph, Jr. who is still the baseball coach there. In the early 90s he was inducted into the Union County Baseball Hall of Fame.

Funeral services will begin at 10am on Thursday, July 7, 2022 from GERITY & CHUBENKO FUNERAL HOME, 411 Amboy Avenue, Woodbridge with a 10:30am Mass of Resurrection following at St. James R.C. Church, Woodbridge.

Visitation will be held on Wednesday, July 6, 2022 from 4pm to 8pm at the funeral home.

Congratulations to Fanwood's Paul Marder for being selected as the Vice Chair for the New Jersey Democratic State Committee's Veterans Caucus. The caucus advocates for and supports members of the military, veterans, and their families. Paul moved to Fanwood after serving 10 years on Active Duty as a U.S. Navy helicopter pilot. He deployed to the South China Sea, served on the federal COVID-19 vaccine task force, and is proud to continue his serving his community and New Jersey's veterans. For more information on the caucus, click here.

Paul is also a member of the Fanwood Planning Board and the Memorial Day Committee.

The Westfield rally for reproductive rights was one of many across America on Saturday, May 14th. Mayor Mahr joined Congressman Tom Malinowsky at the event protesting the draft opinion by Supreme Court Justice Alito that has telegraphed a strong indicator that Roe vs. Wade may be overturned. 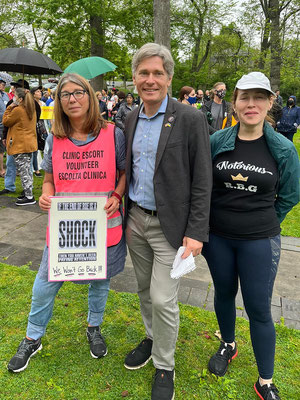 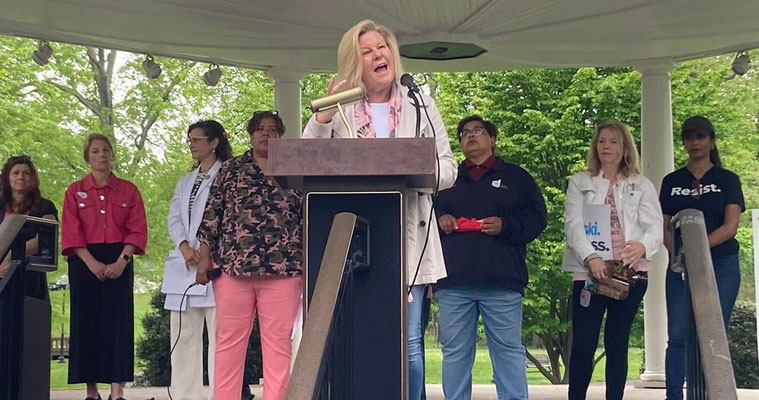 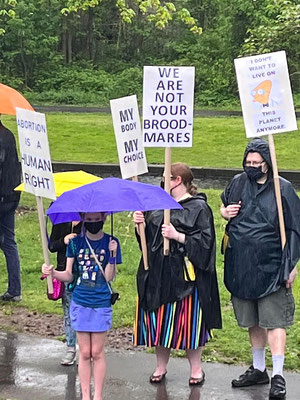 Kathy and Gina at Community Clean-Up

Kathy and Gina chat with members of the Fanwood Environmental Commission during the Earth Day Community Clean-up, back after a two year break for the pandemic, on Saturday, April 23, 2022. 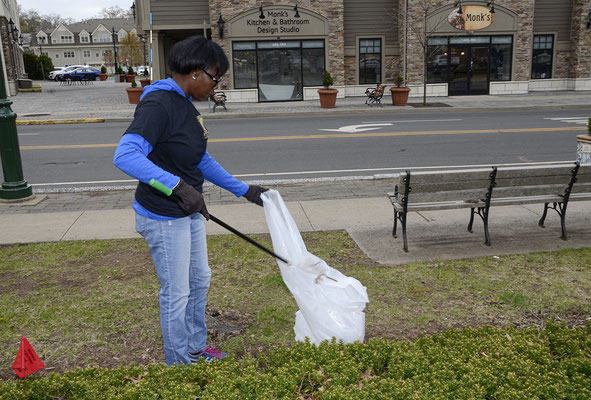 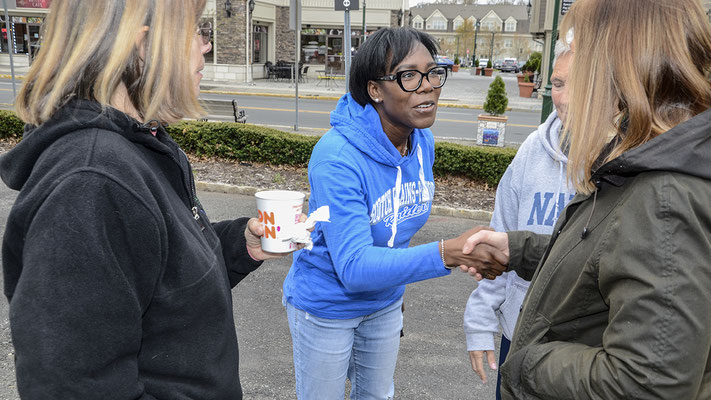 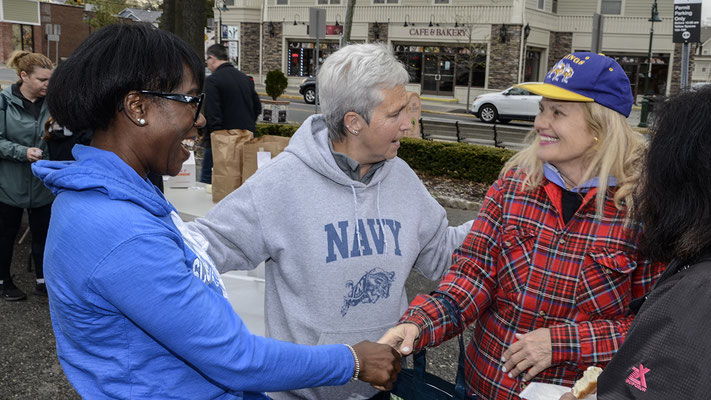 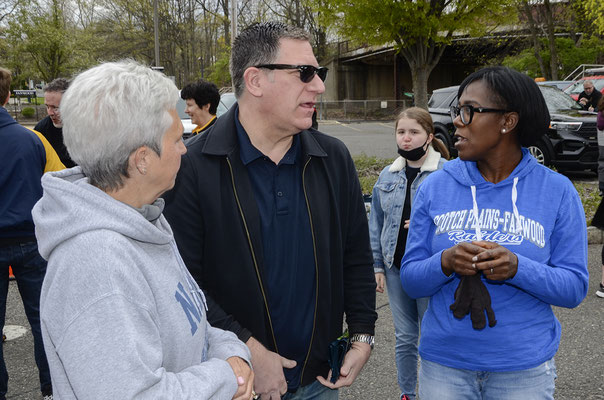 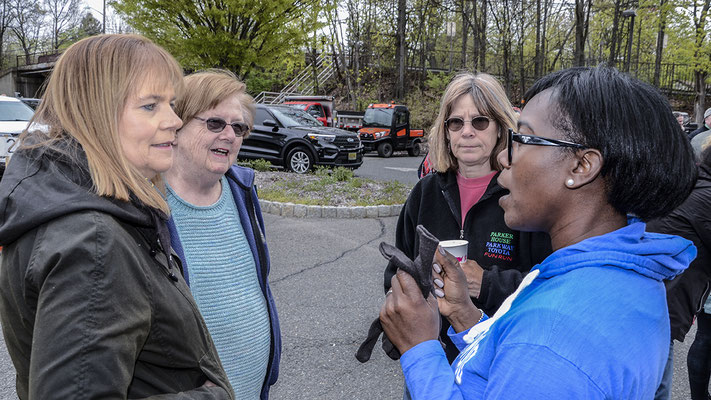 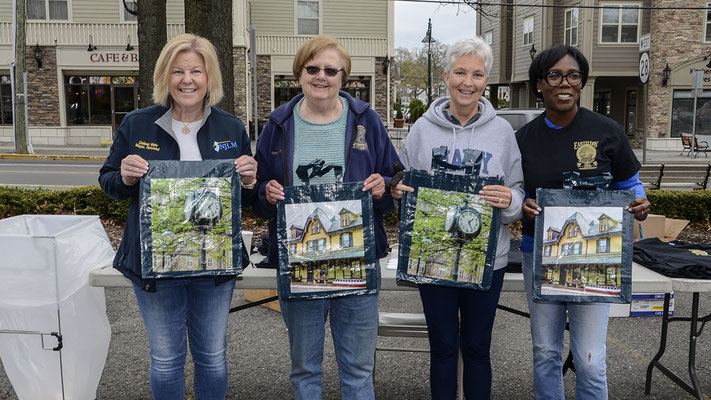 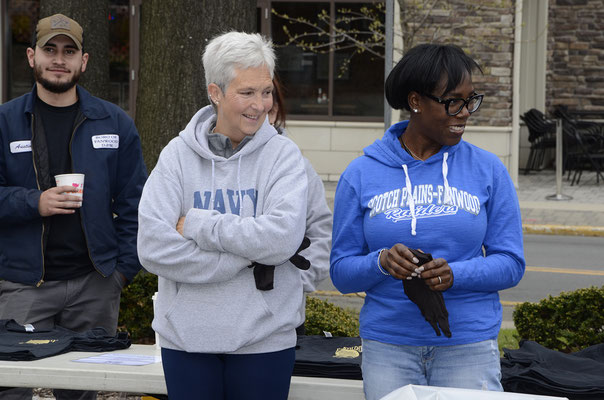 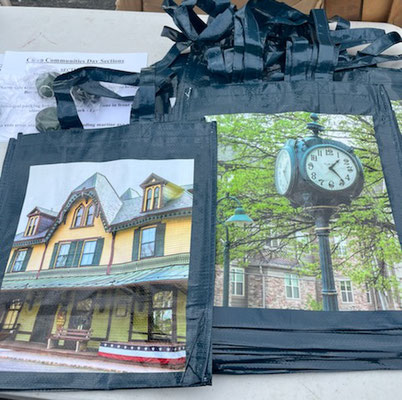 Congressman Tom Malinowski (D) visited Fanwood on Sunday, February 13, 2022, to introduce himself as the Congressman for the 7th District, which now includes Fanwood as a result of redistricting. Malinowski is running for re-election and will face a Republican challenger in November. The winner of that race will become Fanwood's new Congressional representative as of January 2023. Malinowski will be at the top of the Democratic ticket in November in a district that promises a tight race.

He spoke to about a hundred residents in the Forest Road Park recreation building, talking mostly about the accomplishments of the Biden administration including the bi-partisan infrastructure bill that is now law, stimulus money that went to most Americans and COVID assistance for businesses during the peak of the pandemic. He promised that money in the infrastructure bill will fund the Gateway rail project which will build a second rail tunnel under the Hudson River connecting New Jersey and New York. He took questions from citizens on a variety of subjects.

Malinowski was hosted by Mayor Colleen Mahr and the Fanwood Democratic Committee. Westfield Mayor Shelly Brindle also spoke. Much of her remarks centered on the congressman's support for bringing back the one-seat ride to the Raritan Valley Rail line. More from tapinto.net.

(All residents and participants were masked. Principles took masks off to speak and for photos.) 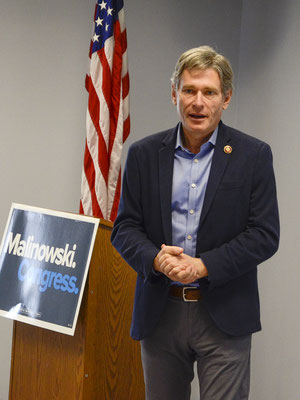 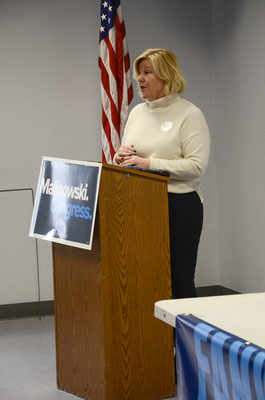 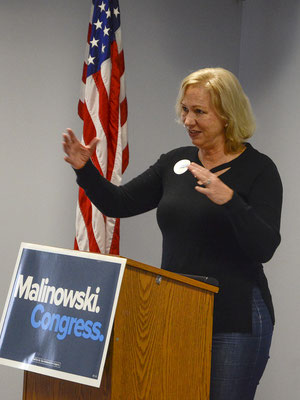 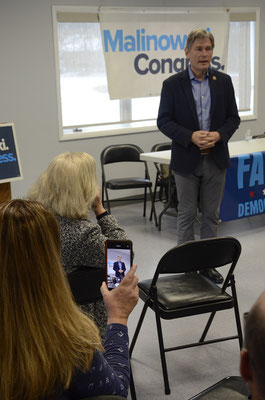 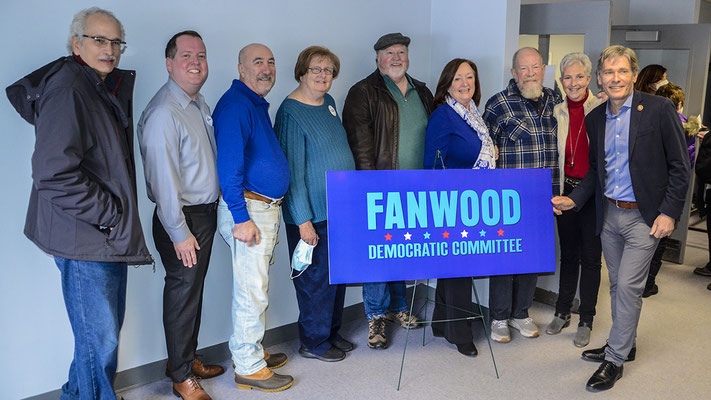 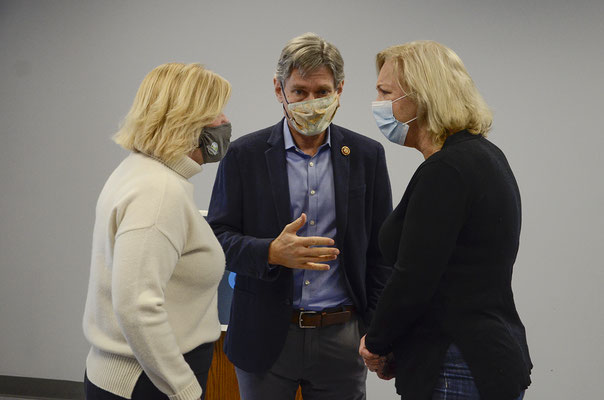 Our good friend Sherman Feller died on Jan. 6th at age 91. Sherm was active in Democratic politics in our town for decades. He was a talented photographer who contributed for many years to the Fanwoodian along with his wife Joan who was on the Fanwoodian Committee. He had many photo exhibitions through the years including this one in Elizabeth a few years ago. Pictured is Sherm in 2015 with great-nephew Finnegan. We will miss his smile and easy-going nature. Our condolences to Joan and the family. His full obituary is here: https://www.therossifuneralhome.com/obituary/sherman-feller

Re-elected Councilwomen sworn in for 2022

Our congratulations to Councilwomen Erin McElroy Barker and Trisha Walsh, both sworn in by Mayor Colleen Mahr on January 3, 2022. Erin begins her third term on the council. Trisha begins her second. The reorganization meeting was held via ZOOM this year due to COVID concerns,  but the Mayor did a separate, outdoor ceremony prior to the meeting. Erin was joined by husband Doug and sons Kieran and Connor. Trisha was supported by her husband, Recreation Commissioner Neil Pierce. We are happy that these two dedicated women will be serving our community for three more years.